Theodor Seuss Geisel ( March 2, 1904 – September 24, 1991) was an American author, political cartoonist, poet, animator, book publisher, and artist, best known for authoring more than 60 children's books under the pen name Doctor Seuss (abbreviated Dr. Seuss) . His work includes several of the most popular children's books of all time, selling over 600 million copies and being translated into more than 20 languages by the time of his death.

The wide appeal of Dr, Seuss' books came from the humourous use of rhyme, wonderful illustrations and surreal story lines. In 2000, Publishers Weekly compiled a list of the best-selling children's books of all time; of the top 100 hardcover books, 16 were written by Geisel, including Green Eggs and Ham, at number 4, The Cat in the Hat, at number 9, and One Fish, Two Fish, Red Fish, Blue Fish, at number 13.[90] 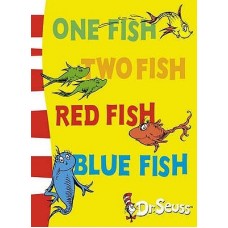 From there to here, from here to there, funny things are everywhere. In this hilarious exploration of simple concepts such as colours, numbers and opp..